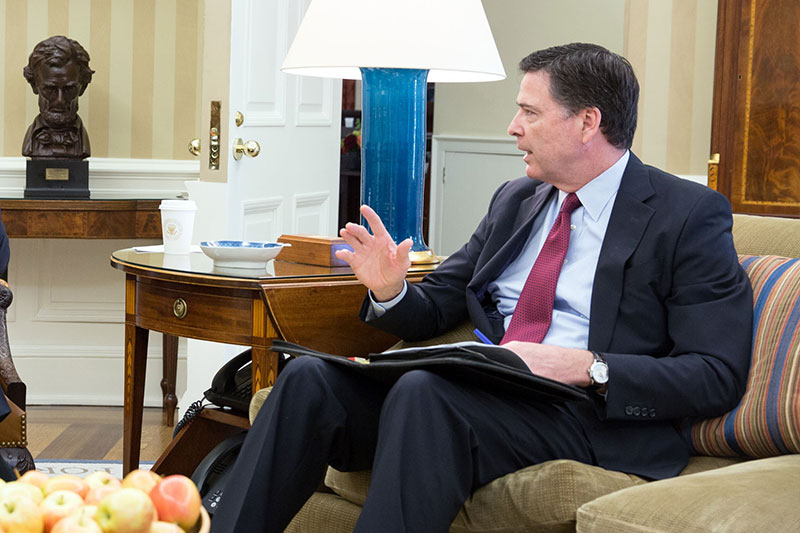 Oh, how the mighty have fallen...

The release of former FBI Director James Comey’s book “A Higher Loyalty” and his recent interview have caused quite a stir; Comey did not hold back in the slightest bit regarding his views, interactions and fallout with President Donald Trump.

It is an open secret that Comey was anti-Trump from the start and was a supporter of Hillary Clinton in the 2016 Presidential Elections. In fact, in his interview with ABC’s George Stephanopoulos that took place Sunday, Comey divulged into the details about his discussion with Obama, before his presidential term ended. Comey said, “I dread the next four years. But in many ways, I feel great pressure to stay to try and protect the institution I lead.”

“I had some sense of the nature and character of the new president of the United States. And I worried very much that there would be an effort to erode the independence of the FBI,” he said. “And I worried, given what I had seen during the campaign, that that effort to remain apart– might be challenged in– in a Trump administration,” added Comey. “And I was right, but that’s what I worried about.”

Trump had fired Comey in May 2017, due to mutual differences, which eventually led to the appointment of Robert Mueller. After the release of Comey’s book, which openly bashed Trump, the President claimed that Comey was a “leaker and liar”.

Comey in his interview had stated that Trump is “morally unfit” to execute the role of President, and confirmed that there is some “evidence” of Trump being involved in the obstruction of justice, to a certain extent. In his interview, he had openly shown his dislike for the President, giving a glimpse into how deep his hate actually ran for Trump.

“Our President must embody respect and adhere to the values that are at the core of this country. The most important being truth. This President is not able to do that. He is morally unfit to be president,” said Comey in the interview.

“Impeaching and removing Donald Trump from office would let the American people off the hook and have something happen indirectly that I believe they’re duty bound to do directly,” he said. “People in this country need to stand up and go to the voting booth and vote their values.”

The former FBI Director claimed that President Trump had told him that “he may want me to investigate it to prove that it didn’t happen. And then he says something that distracted me: ‘If there’s even a 1 percent chance my wife thinks that’s true, that’s terrible.’”

“I think it’s possible. I don’t know. These are more words I never thought I’d utter about a president of the United States, but it’s possible,” he gravely stated.

“Possibly. I mean, it’s certainly some evidence of obstruction of justice,” added Comey. “It would depend and I’m just a witness in this case, not the investigator or prosecutor, it would depend upon other things that reflected on his intent.”

“It always struck me and still strikes me as unlikely, and I would have been able to say with high confidence about any other president I dealt with, but I can’t,” he said, expressing his personal dislike for Trump.