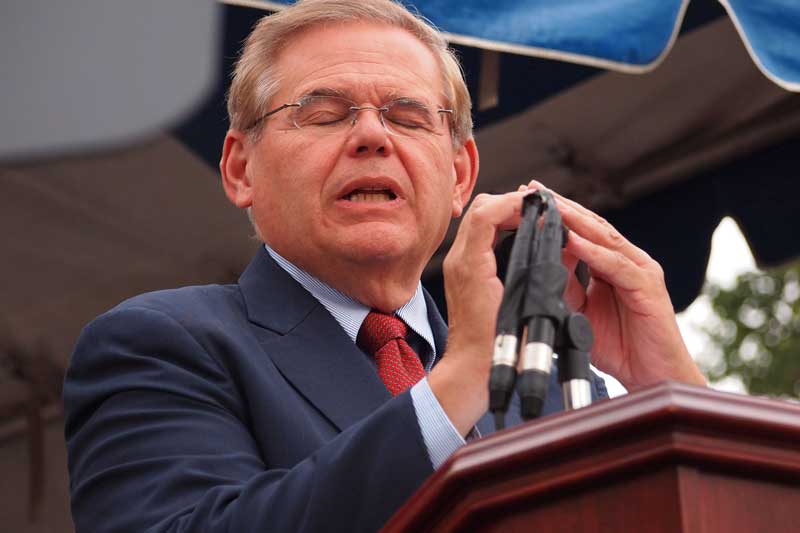 Sen. Robert Menendez was indicted Wednesday on corruption charges alleging he used his Senate office to advance the business interests of a political donor and friend, Dr. Salomon Melgen, in exchange for gifts.

The Justice Department also accused Sen. Menendez of improperly using his office to intervene in a dispute between Dr. Melgen and federal regulators over Medicare charges.

Some pols and media pundits suspect that the Obama Administration indicted Menendez, who currently serves as the ranking member on the Senate Committee on Foreign Relations, as punishment for bucking the President on two foreign policy initiatives – the lifting of economic sanctions of Cuba and the president’s effort to broker a deal with Iran over that nation’s nuclear program.

The speculation is fueled by the fact that the Justice Department knew about Menendez’s actions for more than two years but put any prosecution on corruption charges on hold because control of the U.S. Senate was at stake in the 2014 elections.

But now that the Senate has been lost and President Barack Obama is a lame duck with nothing to lose, many believe the decision was made to make an example out of Menendez and enforce discipline within Democrat Party for the balance of Obama’s second term. Others say the timing of the indictments had less to do with politics and more to do with the approaching statute of limitation on some of the charges.

In early March when Washington whispers suggested that an indictment of Menendez was imminent, Senator Menendez said I have “always conducted myself appropriately and in accordance with the law”…and that “I am not going anywhere.”

The government’s case centers on Menendez’s relationship with Salomon Melgen, a Florida ophthalmologist, a friend, political supporter and donor.

Justice department investigators have focused their investigation on plane trips Menendez took in 2010 to the Dominican Republic as a guest of Melgen with an estimated worth of $58,000 – a sum Menendez paid back to Melgen when word of a federal investigation surfaced in 2013

The Justice Department may have an uphill battle in proving their case against Senator Menendez since evidence gathered in the case may be fall under the Constitution’s Speech and Debate clause, Article 2, Section 6. which reads in part;

“The Senators and Representatives… shall be privileged from Arrest during their Attendance at the Session of their respective Houses, and in going to and returning from the same; and for any Speech or Debate in either House, they shall not be questioned in any other Place.”

In other words, Senator Menendez’s participation in Senate hearings where Dr. Melgen’s (among others) business interests were discussed, may not be admissible in court.

In this article:Bob Menendez, Corruption