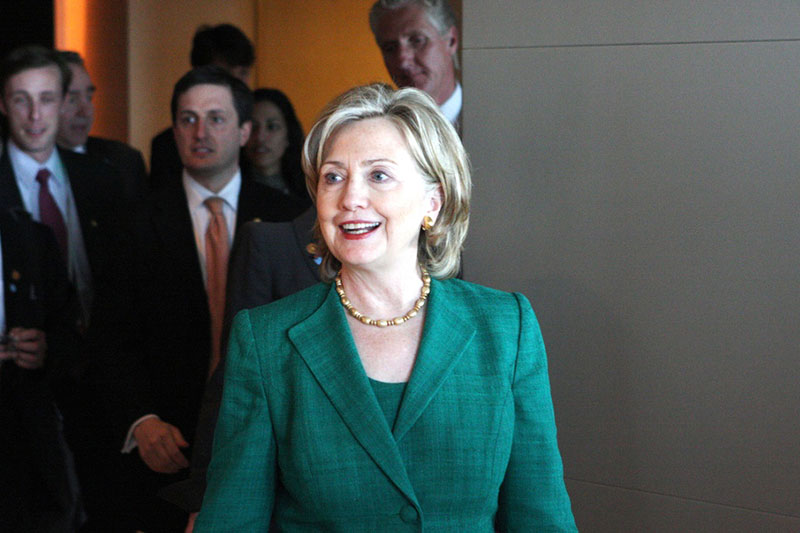 How can we say it any more clearly, than by rejecting her TWICE? Go home lady!

Trump is nearly 25% of the way through his first term–but Newsweek is still refusing to let go of the hope that Hillary Clinton could, somehow, become President of the United States.

In a ludicrous tweet on Wednesday, Newsweek wrote: “Hillary Clinton could still become president if Russia probe finds conspiracy evidence,” and linked to an article that cited a three-month old essay by Lawrence Lessig–a professor at Harvard Law–about how Hillary could still take the Oval Office.

If Trump did conspire with Russia, the president “should resign, or, if he doesn’t, he should be impeached,” Lessig wrote in his essay. Vice President Mike Pence would also have to either resign or get impeached, which would make House Speaker Paul Ryan the president of the United States, Lessig wrote at the time.

Given that there is “no mechanism in American law for a new election,” nor “a mechanism for correcting the criminal results of the previous election,” Ryan ought to nominate “the person defeated by the treason of his own party, and then step aside, and let her become President,” Lessig went on to say.

On Wednesday, Lessig told Newsweek this scenario was still a possibility.

“This is one way it could happen,” Lessig said. “But that’s very different from saying I think it will happen, or should happen, or [that] the evidence is there for it to happen.”

One big problem? There hasn’t been any evidence that President Trump “colluded” with Russia in order to sway the election. And even if he did meet with Russian agents (which has not been proven), simply engaging with foreign officials as a candidate is not a crime, as long as no fraud occurred.

Aside from that, with Republicans in control of both houses of Congress, the evidence against Trump would have to be so overwhelmingly illegal for impeachment and removal from office to have even a chance of succeeding.

And even if Trump somehow managed to get booted from office, the Senate would still need to find enough evidence that Vice President Mike Pence also did something egregiously illegal to take down Hillary Clinton and win the 2016 election.

And even if Pence were to be somehow removed from office as well, Lessig’s “plan” to put Hillary Clinton in the Oval Office would require Paul Ryan–who has not been even tied to the Russia probe in the slightest–to resign the presidency out of a sense of vague sympathy for the person who voters specifically rejected in the 2016 election.

But there’s one last problem: even if Paul Ryan were to also resign, he couldn’t simply “appoint” Hillary Clinton as President of the United States in his place. He would first have to convince Congress–which is still dominated by Republicans–to vote for Hillary Clinton to be his replacement as Speaker of the House (a position that technically can be held by anyone, regardless of whether they’re in Congress), so she could enter the presidential line of succession and ascend to the Oval Office.

Technically, Lessig’s plan is not impossible. But for even one of the moving pieces to actually happen defies credulity. Russia “collusion,” legal or illegal, hasn’t been proven. Trump hasn’t been implicated. Pence hasn’t been implicated. And Ryan would have to, essentially, convince a Republican-majority in Congress to make Hillary Clinton President of the United States. None of that is remotely likely to happen.

And yet, here we are: nearly finished with Trump’s first year of the presidency, and the mainstream media is still dreaming up ways to undo the results of the 2016 election.