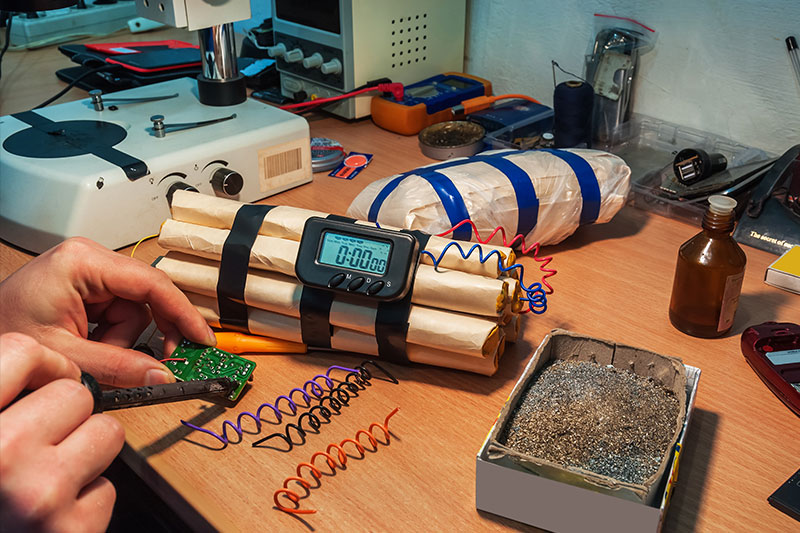 The would-be bomber's NAME tells me all I need to know...

On Monday, FBI agents in Cleveland caught a man who was plotting to detonate a van full of explosives at 4th of July celebrations there.

The man was named Demetrius Nathanial Pitts, but he called himself Abdur Raheem Rahfeeq. He was arrested on Monday after an investigation that lasted months.

The investigation by police was prompted by statements Pitts made on social media. Pitts had made statements support Al Qaeda, and telegraphing violent desires towards American military personnel.

Demetrius Pitts moved from Cincinnati to Cleveland in May. And last week, an undercover agent met with Pitts. At that meeting, Pitts revealed the beginnings of his scheme, to “Blow up at the Fourth of July parade.” Pitts indicated that he intended this particular attack to really “hit them in their core.”

He spoke at length of his hatred for the armed forces. He even fantasized about beheading President Trump, all while an undercover agent, posing as a fellow jihadi, recorded his words. FBI agents say Pitts cased a number of Cleveland landmarks, including the Coast Guard station and Voinovich Park in the downtown Cleveland area.

Pitts took photographs of these places in order to participate in a planned terror attack set for the 4th of July. Authorities say he also had plans to make another attack in Philly.

All the while Pitts continued to tell undercover agents of his hatred for the military. He said he wanted to “chop off heads and hands.” Finally, at a meeting with undercover agents on Sunday, he unveiled his final plan for the attack he believed he was helping to orchestrate.

Pitts told agents, whom he believed to be fellow terrorists, that they should use a van packed tight with explosives. The van would be set to go off during the Cleveland fireworks display and the downtown Fourth of July parade.

Pitts said he wanted to be close by when the bomb went off. “I’m gonna be downtown when the thing go off,” he told investigators. “I’m gonna be somewhere ‘cause I wanna see it go off.”

While he was involved in what he thought was a real plot, Pitts never actually built any bombs. FBI agents provided Pitts with a bus pass so that he could travel throughout Cleveland to mark and case targets. It’s unknown whether he had access to any actual explosives, or the knowledge to use or manufacture them. (Likely not, though.)

Pitts has a long criminal record, (assault, robbery, theft) but investigators don’t believe he had plans to obtain or build any actual bombs.

Instead, FBI agents say he saw himself as the scout for a supposed terrorist cell he believed he was aiding. “I don’t wanna meet all the Brothers,” he told an undercover agent. (Which means he at least recognized the very basics of operational security. Sadly for him he couldn’t recognize a classic leading question.)

When the agent interviewing Pitts asked him whether he wanted to meet “the detonator guy” (because there’s always a “detonator guy” in terrorist plots, that’s how you know it’s legit) Demetrius said: “Now I don’t even wanna meet him. He has nothing to do with me. The only thing I’m going to be responsible for is going to look at the spot, to scope out the scenery.”

Well, now Demetrius Pitts, the would be Al Qaeda warrior, will have plenty of time to scope out the scenery on the inside of his jail cell.